Early documentation and records for the club are mostly missing or lost but a search of the British Newspaper archive reveals that Camberley Chess Club formed in the 1920s. Here is a report in the Surrey Advertiser from Saturday, 2nd March 1929 of matches involving Camberley, Odiham, Basingstoke and Aldershot chess clubs: 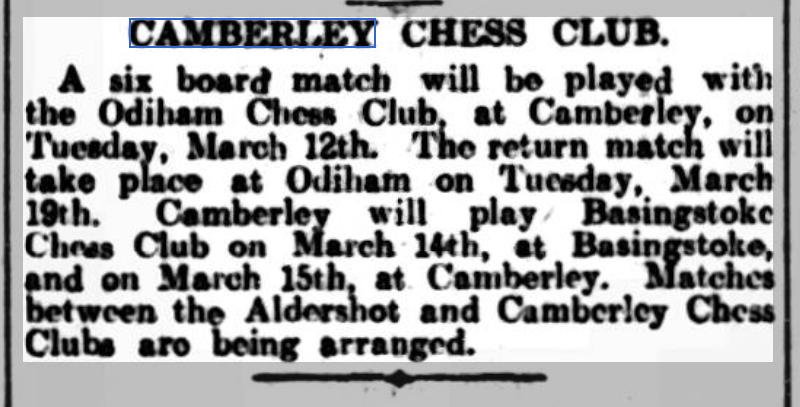 Here is a report from the Surrey Advertiser of Saturday, 20th May 1933 of the club championship:

The club became the East Berks Chess Club in the 1930s. This club then folded at the outbreak of the Second World War. Below is a report from the Reading Mercury of April 1st 1939 detailing a match over ten boards at the Wellington Hotel, Crowthorne.

Thanks to Surrey Heath Museum (who searched their archive) we have learnt that in November 1964 Camberley Chess Club was reformed by Gordon H. Davis (Honorary Secretary) and C. P. Jones (Honorary Treasurer) and the club became a member club of the Surrey County Chess Association (SCCA). Here is a record from the Britsh Chess Federation 1965 – 1966 Year Book of Chess:

The playing venue was, in fact, St. Tarcisius Church Hall, Charles Street, Camberley built in around 1920 which stands to this day. It would seem that this rebirth did not last and the club had disappeared by the end of the decade. In 1966 the club applied to Surrey Heath Council for a financial grant to purchase equipment such as chess clocks to the tune of £26.

Camberley Chess Club was reborn (once more) in 1972 on the back of the huge media (chess on television !) interest in the Spassky-Fischer world championship match in Reykjavik, Iceland.

Anne was a director of BMS Chess Supplies Ltd. which retailed chess books and equipment which the grateful membership purchased !

Anne passed away on November 22nd, 2014 at a retirement village in Meadow Park, Braintree, Essex.

The most notable early member was Keith Bevan Richardson who was master strength and was one of the world’s strongest correspondence players.

In 1975 Keith Richardson was awarded title of Correspondence Grandmaster, the first such winner of this title from the United Kingdom.

Our first big success in local leagues came in 1977 when we won The Waecheter Shield which is the huge Division One trophy of the Surrey Border League and since then a further four times.

In 1978 John Upham went to UCL to study chemistry  and in 1979 Mark Johnstone left the area to become a barrister.

In 1980 we had outgrown the Brackendale Close premises and transferred to France Hill School and in this year we were joined by club stalwart, Colin J Lyne on August 21st 1980. Colin recalls

I joined the club on the 21st of August 1980 and played David Lofts on my first visit. It was a Two Knights Defence and was a 28 move draw. I also played Cliff Collis , George Berzins and Peter Putt who remained in the club many years . A few years later Sean Gaynor rejoined and to this day he is good friends with me . The first match I ever played for Camberley was at Guildford and I won. Frank Woolford used to play board 1. Other players were Russell Brittan, Albert Rowray and Geoff Rideout . Keith Richardson only turned out against Guildford in those times.  I found out about the club when I bought some chess books from Ann Sunnucks who won the British Ladies title more than once .

When I joined it was held at France Hill school and we had to pack up at 1030 as the caretaker would throw us out !

In 1982 we relocated to Camberley Baptist Church, Frimley Road.

Next to join was FM Ian D. Thompson who wrote :

Ian was able to add :

Members that I recall  at the time include C Smedley (opponent from Camberley B in my first match), Keith Richardson, Colin Lyne, John Murrell, Richard Webb (for a year or two, I think), Nigel Povah (living in Frimley at the time, not sure he was ever a proper member, but he definitely played one or two matches for Camberley), Gordon Birch, Alec Aslett, Bob Pidgeon, Frank Woolford, Ian Duvall (I think, but possibly he joined after I left), Dino Lymbouris, Martin Sommer, Peter Putt, Thomas Morrison, Paul Sloane, Richard Pennington, Sandy McCubbin (I think, but possibly he joined after I left) and Richard Welford.

In 1983 we won the Haslemere Trophy for the first time. Since then we have won it twice more.

During the 1999 – 2000 season the following members played graded games in local leagues :

On October 5th 2002 we registered camberleychess.co.uk and courtesy of Martin Wallman we published our first web site. Even at this early stage we published details of the thriving junior part of the club which had around 20 – 30 junior members. The very first version of the site looked like this.

By 2005 we had a healthy membership including around twenty junior members most of whom were recruited by International Master Andrew Martin who was our board one player.

In March 2007 a club contingent spent a very enjoyable weekend with our twinned chess club in Bietigheim-Bissingen, Germany. The trip was organised by our current Secretary, Ivor Kelly.

2008 saw our first appearance on the BBC by taking part in the famous Eggheads quiz show :

We won the Premier Precision Trophy once in 2014 and the runner-up trophy, the Mick Tarrant Plate four times to date.

Our annual Most Improved Player of the Year Trophy in 2017 was won by Club Treasurer Paul Sloane. The award is annually presented by Colin Lyne seen here.

In 2018 the award went to Martin Wallman.

In 2017 we held our first Keith Richardson Memorial Tournament which was won by Julien Shepley. Since then it has been in 2018 and 2019. In 2020 it was held online on the Lichess platform for the first time and was won jointly by Clive Frostick and WIM Natasha Regan.

In March 2020 we paused meeting at the Baptist Church and commenced a weekly series of meetings online using the Zoom platform. The video from each meeting is posted online to our YouTube Channel.

Following our online efforts the club was judged in 2021 by a panel of the English Chess Federation and won the award for ECF Club of the Year.

Camberley Chess Club meet Over The Board weekly and Online too.

Please check Events page for all the latest meeting details.